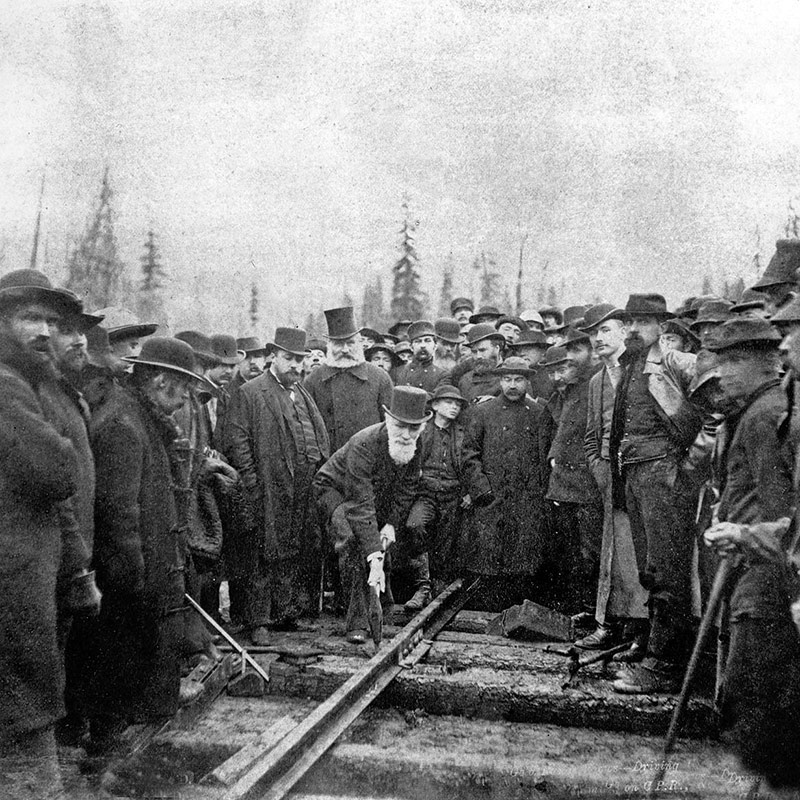 Top things to do in Craigellachie BC. The Last Spike.

Top things to do in Salmon Arm, BC.

As we continued on our one-way car-rental from Vancouver to Calgary, and at just about midway on the drive, we passed through the town of Salmon Arm. The town has grown up around one of the four ends of Shuswap Lake, a vast body of water that on the map of British Columbia looks a little like a giant, blue chromosome.

If you're interested in B.C. history, you'll want to visit the R. J. Haney Heritage Village & Museum. They've constructed a part of the town to look very much as it did between about 1910 and 1930, considered by some to be Salmon Arm's boom years. The place also has a dinner theatre, a tea room and a restaurant. They hold auctions and other events including a pie-baking contest (that's the one I'm really sorry I missed).

But I was perhaps most intrigued by a timeline of the town's history written by the museum's curator, Deborah Chapman. I looked at it and asked myself, If I were tasked with chronicling the history of a city, what events would I have chosen? The answer is, very much the same kinds of events that Ms. Chapman chose—at least, if I had her research skills. So what are those events? What is deemed significant in the history of Salmon Arm? Here's a sampling:

The first is in 1815, David Thompson makes note of a lake that the people living there call Shuswap to the west of the Columbia River, which he happens to be exploring. The Hudson's Bay Company establishes a trading post. Someone named Tom Snaas builds a two-story building and a wharf on the lakeshore. He clears 15 acres of land. Surveyors come through town, marking the route for the Canadian Pacific Railway. Dutch Charlie's, a brewery and gambling den, opens for business. A road is built connecting the town to the railway station. The first church is built. Fruit trees are planted.

A sawmill is established to provide ties for the railroad. The first school opens. Dutch Charlie's (Remember? The gambling den?) is shut down after a man there is shot dead. Someone ships in a generator and for the first time, businesses have electricity for the evening hours. Then running water.

You can see the complete list of events here: https://www.salmonarmmuseum.org/timline_new.htm

For the most part, these timeline events could have been milestones in the history of almost any town in North America. They have names and dates specific to Salmon Arm, of course. But change those names, and these things could have happened almost anywhere in North America during those years.

But why these particular events? Why didn't the curator mention, for example, the heat wave of 1939? The establishment of the city's first park? Or the record sockeye spawning run of 1913? Or who ran for mayor that year?

Looking over the timeline, you may notice something common to most of the entries: From the beginning, almost every event represents the pushing back of the frontier or wilderness. The elements. Nature. Because that's how the Europeans who settled the area saw progress. The stronger and deeper they built a bulwark against the dangers and discomforts of the natural world, the greater the measure of their progress.

This progress consisted not only of the infrastructure they were establishing—the roads graded, the bridges, buildings and power lines built, the acres planted. There was also the cultural fort in what they saw as a vast emptiness. These included the churches, the schools and even—perhaps especially—the opening of Dutch Charlie's.

This we call the progress of a nation. Civilization. And of course, it was progress. At a time when Europe's footprint in an endless wilderness was still small, anything to deepen that footprint was important. By around the middle of the 20th century, the character of the timeline entries has started to change. Rather than firsts, older buildings and facilities are being replaced with new and better ones.

The firsts become things like McDonalds arriving in town in 1981. And when the Golden Arches arrive in your city, civilization has been more or less secured. Or perhaps its demise has been secured; depends on your point of view. Either way, the town is in no danger of being left off the maps.

In 1998, there's mention of the Mt. Ida Fire. The last entry is in 1999: A new RCMP Station opened for business. There, the timeline ends.

Does that mean nothing of significance has occurred in Salmon Arm in the last 20 years? Of course not. There are 18,000 people living there. It's just that nothing more has occurred to establish Salmon Arm as a city. We're long past that. Salmon Arm isn't going anywhere.

It's not news that the environmental movement here in North America has been stalled for a long time. In fact, many of us believe that it's currently in retreat at a time when it's never been more important. I've often wondered why. Why isn't saving the planet a top priority for more of us, when the need is so urgent?

Looking at Salmon Arm's historical timeline, I wonder if our progress in the environmental movement has stalled because that other kind of progress—the kind that built Salmon Arm and this nation—are so ingrained in our natures. We still see ourselves as pioneers, as settlers, as builders. You have only to look at The History of Salmon Arm timeline as proof or, for that matter, any TV ad for a pickup truck.

But we are going to have to change that image of ourselves, and we're going to have to change it now. If not, events like that second-to-last entry in the Salmon Arm timeline will be happening so regularly they will hardly be worth noting. I said earlier that towns like Salmon Arm are long past any danger of being overwhelmed by nature. But that's not true. Our continued existence is still entirely dependent on the natural world, no matter how many roads, bridges and buildings we have put between us and it.

What events will the next century in the Salmon Arm timeline bring? Will it continue to chronicle the construction of a bulwark against nature—a nature that, in a last-gasp effort, turns against us with the fury of the Mt. Ida fire?

Or can we find a better way to measure progress?