Top things to do in Vancouver, BC. Do the Grouse Grind in Two Minutes!

Run the Kettle Valley Trail to the Othello Tunnels in 2 minutes!

Top things to do in Hope, BC. Eat incredible pie. Seriously.

Top things to do in Hope, BC. Become John Rambo. 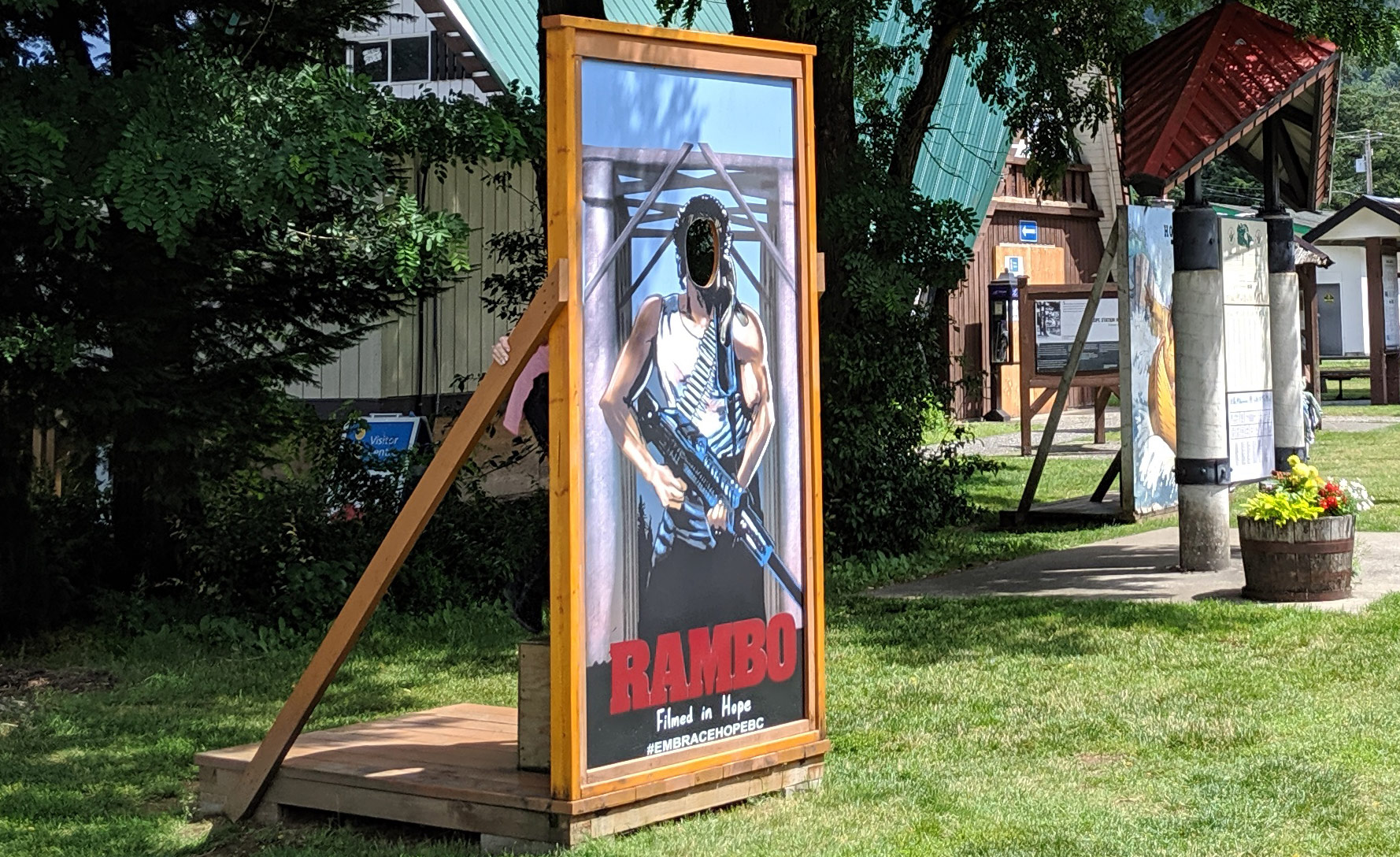 A look at the things to do in Hope, BC, the places to see, and the people to meet on a one-way car-rental from Vancouver to Calgary. After renting his car in Vancouver, pointing his compass East, Dave shares a Hollywood-inspired reason to stop along his way to Calgary.

"So," says Jim, "This is the bridge that the Sherriff, played by Brian Dennehy, drives Sylvester Stallone across just before kicking him out of his squad car. He tells him that if he keeps walking, he'll eventually get to Portland. Essentially, he's running him out of town because he doesn't like his haircut. And could use a bath. And that's where the trouble begins."
"I see."
"Actually, it wasn't this bridge."
I look at him, baffled. "So why are we looking at this bridge?"
"Well they had to tear down the original because it was old. But they built this one to replace it."
"And it's an exact duplicate."
"Oh, no. It didn't look anything like this one."
"Okay."
"I don't feel like you're really embracing the spirit of the Rambo tour," says Jim.
"No. No, I am. I just wasn't all that big a fan of the movie, that's all."
"Hey," says, Jim, lowering his voice. "Keep it down. It's kind of a big deal around here."

It appears that my friend is right. First Blood, the original film in the Rambo movie franchise, was shot right here the town of Hope, in 1982. And the town does seem to have taken it to heart—even if the filmmakers kept the town's name but situated it in Washington State, as so often happens to BC towns used as locations in Hollywood films. Even Vancouver.

But just outside the Hope Visitor Info Center is a plywood likeness of Rambo, wearing an standard-issue undershirt and brandishing a machine gun. There's a hole above the neck, framed by Rambo's trademark shaggy haircut. No one has to tell us what to do:

Then there's the First Blood walking tour—which is what Jim is conducting now. True, it's no longer a guided tour; it's "self-guided." But even for someone who's not the film's biggest fan, I have to admit that the tour features some beautifully scenic locations.

This place is wet. Hope is where all that moist air blown up the Fraser Valley piles against the mountains and forms clouds, which drop their load. Accordingly, the firs and cedars are tall, thick, and dripping with moss.

It's the perfect place for a veteran of the Vietnam war, driven deep into the forest because of questionable personal hygiene, to hide out. From here, he can strike out at anyone foolish enough to track him into this temperate counterpart of his native element—the jungles of Vietnam.

But of course, track him they do. Only to pay with their lives.

"I heard that Sylvester Stallone never wears a pair of socks more than once," says Jim.
I have to ask: "Really? Why?"
"I guess he just likes the feel of new socks."
"What does he do with them after he wears them?"
"I don't know. Probably gives them to some charity for auction."
"Huh. Not something I would have guessed about a man who eats tree bark for breakfast and wipes out a crack tactical squad for lunch."
"When you eat bark for breakfast you take comfort wherever you can get it."
Another stop on the tour (but one requiring a 15-minute drive) is Coquihalla Canyon, which plays Chapman's Gorge in the movie. This is where Rambo has to climb from the river to the rim of the canyon while a sniper shoots at him from what he believes is the safety of a hovering helicopter. I'll leave you to guess how that goes.

Later, Rambo blows up a gas station and some army trucks. These more urban stops are accessible as part of the true walking tour. The film's carpenters constructed the shell of a police station entirely for the purpose of shooting it to pieces. After the film wrapped, the studio that financed the production donated it to the town. It now serves as Hope's Canyon Golden Age Club.

All in all, it worked out rather well for the town of Hope. Certainly, much better than it did for many of the characters and extras who paid the price of picking on one taciturn Vietnam war vet. And while it's far from the only reason to see Hope, for fans of the film—and it is a pretty good movie—it's one attraction among many.

"I can tell you one thing," I say to Jim as we start down the road towards our next stop. "They could have easily avoided all that death and destruction."
"How's that?"
"Instead of running Rambo out of town, if Brian Dennehy had just driven him to the Home Restaurant, sat him down, and ordered him a piece of that banana cream pie, Rambo never would've blown up the town. He'd probably still be there now."
"Eating pie."'
"And weighing 300 pounds. You wouldn't need that plywood cutout anymore to get your picture taken with him."
"Nope. They'd have the real version, right here in town. ‘Buy Sly a piece of pie.'"
"Get a free pair of socks in return."
"Now that's a tourist attraction."

Read more things to do in Hope, BC, including where to find incredible pie.